This meeting was very rich, the children lived an experience which will mark their school days.
Each time you knew how to value their work, they had the chance to express themselves, everything took place in a serene and caring atmosphere. Each idea was concrete and had a precise goal. Thanks to the printing of their portrait they also learned to look, to analyze, to respect, to respect themselves.The numerous times of dialogues and exchanges allowed them to learn to listen to each other, to dare to expose their point of view. Thanks to you, during a difficult period when it is impossible to realize outings towards cultural places, we were able to evade because it is the ART which came to us, what a breath of oxygen! The polyvalence and the joy of living of Andy contributed to the success of the project. Coralie
I was invited to work in the community of Bethune-Bruay, France with Andrew Matthews, from October 2019 to March 2021. This residency project became more prolonged than anticipated, due to the Coronavirus global pandemic. This particular period, when most exhibitions were closed, gave us an opportunity to bring together, as references, artefacts from local cultural structures’ collections, and to fulfill our objective of exposing students to the process of creation, and creating opportunities to dialogue. I believe it is important to value individual art and how it relates to the empowerment of the whole community.

I exchanged with the teachers via email to follow up on this process, while Andrew had treated the photographs in Black and white.
Some examples from 125 participants: Portrait photographs treated in black and white with gestures. 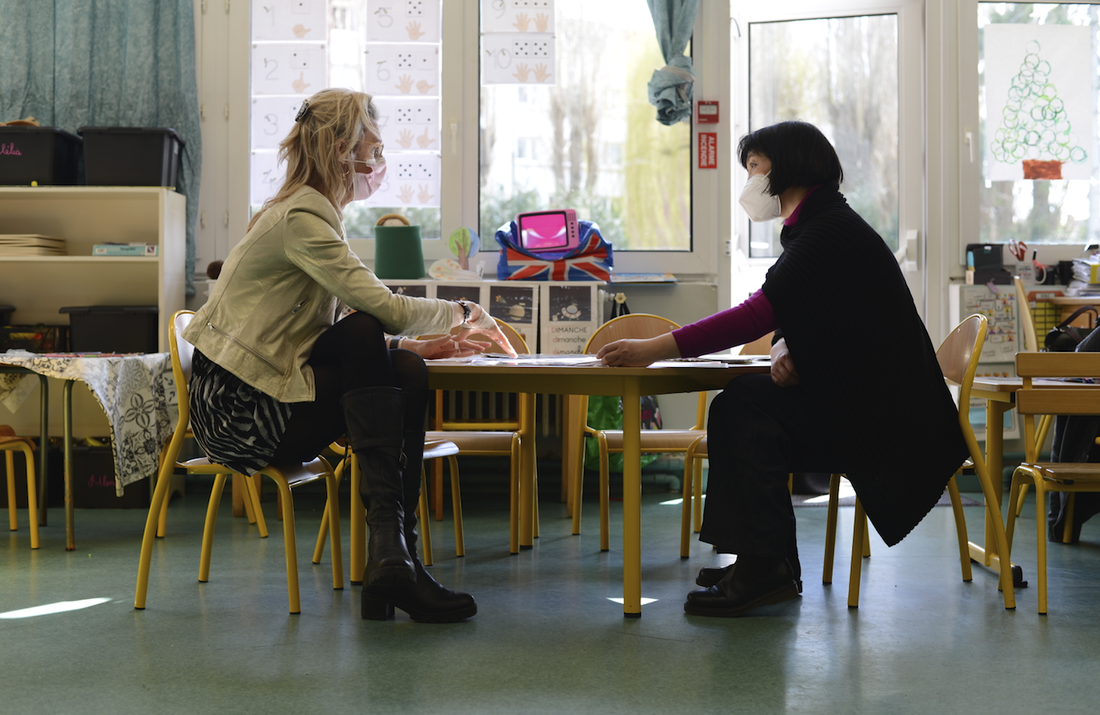 After the introduction and discussions, I presented their portraits. Then began to introduce them to the textiles that we were going to use.
I asked them what they see, what they felt and eventually if they were inspired to write a story.
My third PDF was on the textiles. Introduction to textiles from the collection of La piscine, definition of fabrics and textiles, how textile and was created through exchange of different civilizations, short summery of history of textile in France, Introduction to Gandhi and weaving, Artists works that involves thread and weaving that are socially engaged and idea that each thread represents an individual and fabrics represents the society. I asked the students to attempt weaving in this prospect.
Examples from weaving faces of participants by Andrew Matthews

Weaving: Extract from experimentation by teachers and students

In the following week,  We began to work with textiles pattern. I began the process by preparing the PDF.
I asked the teachers to share the PDF with students in the way it suited their age. This means, all the children were aware of diverse patterns, and to be able to observe them and speak about them. I also selected for each classes 125 examples of textiles from the collection of la piscine for students and teachers to observe and discuss. They were in A4 format that I sent to the teachers via postal service. These digital files were explored in diverse technique.
In PDF, I introduced: the collection of Museum of La Piscine, Definition of patterns,  Pattern as the environment of life, the nature, trees, flowers and animals. I wrote about what these motif symbolized, different periods, influences of different countries, and different art movements. I wrote also about human representation dating back to cave period to selfies. How the representation of human figure is essential for survival, to unite a community and beliefs. I presented the human representation patterns from the collection, dating back to 7th century Egypt, 16th century , Italie, following the 18th century France, in relationship to china, with Silk road and it's production, that can be also be seen in Ceramic and the puppet play Guignol. I ended the presentation of human figure in textile till 20th century which represented colonialism in France. I presented the architecture patterns from the collection as well.  Then I introduced the textile industrial revolution in their region. I also touched the aspect of narration in textiles by introducing toile du jouy showing historic events such as end of slavery and French revolution. I created a form for teachers to dialog with students. In my PDF nothing was compulsory. Teachers chose what ever was suitable for them to work with the class.

My husband who received Miki's emails said that Miki must love what she does. Every time, I received the PDF, I went through it then I had to take a breath. The density of information were overwhelming. Yet I went through all the PDF with my students. It is an unforgettable experience to work on the project. Marianne